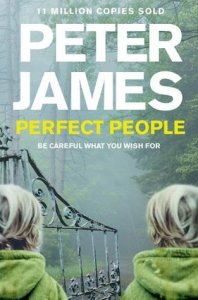 When a young couple join a fertility programme run by a clinic in America, they little suspect that the happy day that follows is the last day of mankind’s evolutionary supremacy. Mankind is facing its greatest challenge: obsolescence.

After losing their first child to a deadly genetic disease John and Naomi Klaesson are looking for a help from geneticist Dr. Leo Dettore. But as the book cover warns – ‘’Be careful what you wish for’’.

As probably predictable not everyone in the world is embracing this idea about possibility of specifically selecting and enhancing or shutting out genes particularly religious fanatics and in this story Disciples of the Third Millenium.

The first surprise for John and Naomi after coming home is that they are having twins (Luke and Phoebe) instead of just a boy. When Dettore gets killed by Disciples everything becomes crazy + no couple that have been to Dettore can’t feel safe. And that’s one of the reasons that make John and Naomi move to England, to rural area.

From time to time there are creepy moments as Luke and Phoebe are getting smarter even for their age.

Already there are similar possibilities for parents like genetic tests for risks of inheritable diseases and it’s not just something from science fiction. Makes you to think about related thing like GMO and pros and cons of both.

This site uses Akismet to reduce spam. Learn how your comment data is processed.